Exciting changes are in store for a local Blackville business!  In an open letter, Main Street ValuFood’s owner Jerry Stafford has announced that his store has entered into a ten year deal with Foodland. Foodland is a Canadian chain of grocery stores founded in 1985. Its stores are located mostly in rural areas of the provinces of New Brunswick, Newfoundland and Labrador, Nova Scotia, Prince Edward Island and Ontario. Stafford will remain store owner.

A letter from Jerry Stafford:

Yes, Foodland is coming to Blackville. With the loss of Coop Atlantic in May of 2015, we have been struggling to have products and programs available to our customers.  We are entering a 10 year deal with Foodland that will bring:

Within the next 6-8 weeks, the store will be undergoing $500,000 in renovations, including new cases in produce, more freezer doors, computer system, signage and all new colours.

This last year has been difficult to say the least, but a new future is in sight!

Jerry and my great staff. 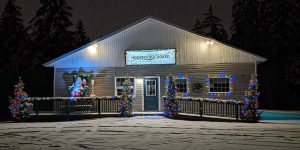