The newly elected Blackville Village Council was installed in a small ceremony Monday night at the Blackville Community Centre. The event, normally open to the public, was invitation-only due to current COVID-19 regulations.

Ian Fortune was sworn in as mayor, replacing outgoing mayor Christopher Hennessy, while Denver Brennan was installed as deputy mayor, replacing Fortune who held that position for the past five years.  Re-elected councillors Cindy Ross and Cindy Underhill were sworn in, while re-elected councillor Amanda Brennan will be sworn in at a later date; Councillor Brennan was unable to attend due to illness. Village clerk Tina Peterson conducted the Oath of Office ceremony.

Following the event, Mayor Fortune addressed the crowd stating that he was looking forward to working alongside council and serving the residents of Blackville over the next four years.

View photos from the event below. Click a photo to enlarge. 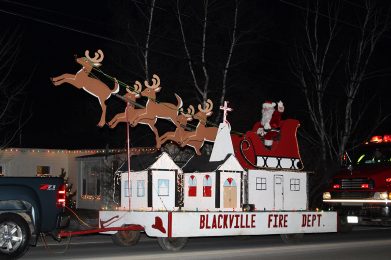 Santa Claus Parade of Lights Set for December 10 in Blackville